At Last, Healthcare Security Managers Have Reasons for Hope

Similar Healthcare Challenges Faced in the U.S. and U.K.

During my visits to the U.S. over recent months, I’ve been struck by the similarities between the healthcare sector here and that in the U.K. Despite superficial differences, they share many of the same challenges. In both countries, workplace violence has become a top concern, with verbal and physical attacks against clinical and security staff continuing to rise in hospitals, parking garages, community clinics, and in patients’ homes.

The extent to which this is a shared issue was made obvious at the recent NAHS annual conference. The association’s Chair, Roger Ringham, was praised for giving an unscheduled speaking slot to the guest who was accompanying me from the U.S., Eric Sean Clay who currently serves as the Vice President of Security Services for Memorial Hermann Health System and President-Elect of the IAHSS (International Association of Healthcare Security & Safety). Eric’s presentation was warmly received by the many NHS security managers attending, from various parts of the U.K.

Speaking to them afterward, it was clear they found it useful to learn that their own experiences are far from unique. It’s instructive for them to see how fellow professionals are dealing with exactly the same problems, not just locally but internationally. And nobody is in any doubt that the problems are serious. As well as having harmful consequences for those involved, rising aggression ultimately impacts the standards of care that patients receive.

The Link Between Aggression and Poorer Staff Performance is Clear

Every time a healthcare worker is subjected to violence, or to threats, their mental well-being, their morale, and their ability to do their job suffers. Even when a member of staff appears to deal with an incident and shrug it off – or worse, where a culture develops that accepts a certain level of aggression as ‘part of the job’ – the harmful effects will accumulate.

We know that the majority of healthcare professionals are caring and committed individuals dedicated to their work. But over time, even the greatest dedication will be eroded if someone regularly feels unsafe or anxious and if they get poor support from their employer.

They Will Find Work Elsewhere, Where They Feel Better Cared For 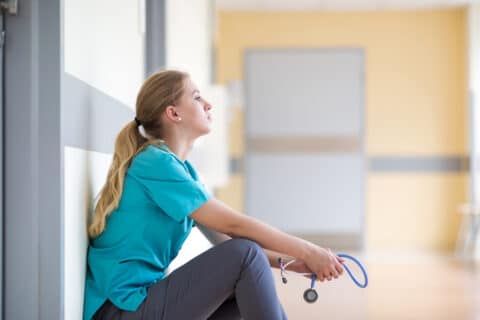 Or they will leave the profession entirely. The result, seen in both the U.S. and U.K., is an increase in staff absences, more staff resignations, more experienced medics opting for early retirement, and a costly recruitment crisis or use of agency staff that affects the whole sector. In both countries, healthcare providers are routinely forced to recruit staff from overseas (a policy that can have its own drawbacks, not least the fact that it exports skills shortages from one country to another).

There are many factors behind the rise in aggression in healthcare settings, many of which appear related to increased levels of stress, depression, and mental health issues in society generally. And unfortunately, with economic pressures growing, those problems are likely to get worse.

We also see a worrying negative spiral occurring – the more pressure clinical teams come under, the more over-stretched services become, the more there are delays or failures in providing treatment, and the more likely it is that patients, or family members, will become frustrated, frightened, and confrontational.

One hospital security manager told me about the impact that the creaking healthcare system had on one particular patient, a man with a known history of mental health difficulties. This man had been kept waiting in a hospital cubicle for so long for appropriate treatment – over a week – that eventually his self-control snapped. It then took seven clinical staff and four members of the security team over an hour to de-escalate the situation.

Another hospital security manager bemoaned the fact that people had gone from ‘clapping’ for healthcare workers during the pandemic to ‘slapping’ them now. What’s the answer? Despite the huge current problems, there is cause for hope. Significant silver linings were in evidence at the NAHS conference, as security managers pooled their collective knowledge.

Pioneering hospitals and healthcare providers are discovering more effective ways not only to safeguard staff but to ensure that they feel safer too, a critical component often overlooked. We are seeing them improving security standards through innovation – not by repeating traditional strategies of investing in more cameras, more access control, and more security staff, but by force-multiplying their resources with new real-time technologies that have significant impacts on the incident outcomes.

I was delighted that one NHS Trust we’ve been working with has now been recognized for its achievements. Wayne Sherratt’s team at Kent Community Health NHS Trust was presented with the Healthcare Security Innovation Award at the recent NAHS Annual conference. This is exactly the kind of positive change that we need across the sector. It will help to break the negative spiral, reducing the impact of violence and aggression, and tackling the recruitment and retention crisis.